A parody is a new work that uses parts of an older work to comment on or criticizes that same older work, usually in a funny way.

Usually, if someone’s work is copyrighted, you need their permission to use it.

However, a parody of a copyrighted work can qualify as a Fair Use, which means you don’t need the copyright owner’s permission to make and share your parody.

However, just because something is funny (like changing the lyrics to a popular song) doesn’t necessarily make something a Fair Use parody.

Is my parody a Fair Use?

There’s no simple rule, but courts weigh FOUR factors when deciding whether or not a parody is a fair use of someone else’s copyrighted original work: “Gone with the Wind” vs. “The Wind Done Gone” parody novel The Cat in the Hat children’s book vs. “The Cat NOT in the Hat” OJ Simpson parody 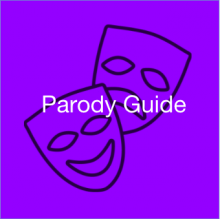